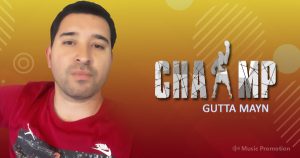 Hip hop music has long evolved into one of the most adoring genres in the world since it was originated on the streets of the US in the late ‘70s as a medium of expression for the minorities in the country. Budding hip hop star Gutta Mayne’s culturally potent debut single ‘Champ’ optimizes that freedom of expression through its fearless lyricism and captivating sonic elements. Spending his fair share of time on the streets, this young musician elaborates on his difficult experiences and pain through his music. He quite beautifully understands his responsibilities as a musician that he has towards his listeners to not just entertain them but help them through difficult times as well.

Drawing inspiration from his own life, the talented vocalist is determined to make music outside the norm of modern-day hip hop and rap. Proving to be a well-seasoned artist Gutta Mayne brings his natural style of smooth and soulful beats to the plate that has expanded his demographic to the larger audience. His intoxicating energy and refreshing musical technicalities builds the foundation for a bright and strong future. With the purpose of conveying his messages to the mass he chose to be innovative with his wordplay without lacking the entertainment which music is supposed to provide, he is careful to never lose the groove in his soundscape.

Hailing from Texas, this aspiring singer has proved his musical genius portraying upbeat tunes maximizing the effects of emotional and well-enhanced lyrics spreading fiery positivity and a clear conscience. Consistent and evident rhythmic bassline maintains equilibrium with his appealing and exotic vocal dexterity in his newly released song ‘Champ’. The currently independent artist is ready to win a place in the hip hop industry with his unorthodox and incredible musicality and robust energy.

To listen this track click the given link :
https://soundcloud.com/gutta-mayne-41239472/champ