Whyl has amplified the huge stature of the musical genre of hip hop. The Florida rapper has introduced some magnificent tracks to the hardcore fans of the genre. 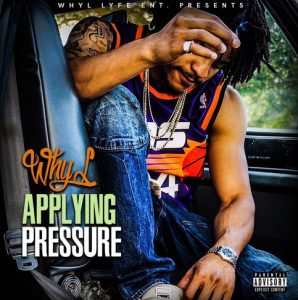 A variety of sections have been touched throughout the releases of Whyl. A united sense of passion and confidence pours through each of his tracks, which is indeed important for the success of any track. The touch of awesomeness added by the rapper is just fascinating to witness. Leading with quickly-addictive rhythm, all of his tracks are perfect examples of musical magnificence and exquisite artistry. The hypnotizing ingredients used in the creations amplify the effect, showing all the forms of the Florida rapper. The captivating elements of his tracks, work in unison to bring the best out of the genre and make the audience applaud him.

‘Left Me In The Cold’ is one of his recent tracks that tasted huge success in the music arena. The bar of majestic musicality has been raised through the release of this track. The laid-back performance of the artist speaks volumes of his versatility. The rhythmically eclectic flow of his another track, ‘Shine Together’, has taken a slight opposite turn, making the audience go through some complex details of music-making. The bright soundscape offered through the gorgeous presentation of the tracks All I Need’ and ‘How I Feel Freestyle’ is the highlight of his music-making.

‘So (Miami) Freestyle’, is another track of his that has attracted the ears of the audience. This track established him as the true heir of the genre of hip hop, who is capable of making it big in the industry. Working under self-owned production house, WHYL LYFE ENT., Whyl is now on a high level of creative brilliance and looking forward to carrying it on with his upcoming releases. The uniqueness that he has brought into the genre is like a fresh breathe of air into the saturated industry, something the audience was bored of. Listen to more from the artist, on SoundCloud and YouTube. Also, follow him on Instagram to know more.

For more tracks visit the given Soundcloud link :

Richard Anthony: Front News Updates Reporter I am Richard Anthony and I have over 13 years experience in the financial services industry giving me a vast understanding of how news affects the financial markets. I am an active day trader spending the majority of my time analyzing earnings reports and watching commodities and derivatives. I have Masters Degree in Economics from Westminster University with previous roles counting Investment Banking. Address: 2922 Lochmere Lane Stamford, CT 06995 Phone:  (+1)- 860-461-8290 Email: [email protected]