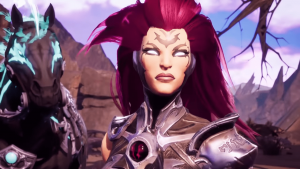 Sony’s new implemented changes and approach towards their new line-up for Play-Station Plus that included Vita games and PlayStation 3 were aimed at introducing higher grade game titles for avid PS4 owners across the world. Till now, the graphical and technological improvements have been quite commendable and with September knocking the doors, it is going to be yet another important launch with two of the most anticipated action-adventure games in the backdrop of contemporary gaming trends, namely, Darksiders 3 and Batman: Arkham Knight.

The 4th entrant of the Arkham franchise, Batman: Arkham Knight is the third developmental installment by Rocksteady Studios. Batman: Arkham City saw the Caped Crusader save Gotham from destruction but this time, the stakes are high as he is coming face-to-face with his biggest challenge and fiercest enemy yet, Arkham Knight. He is keeping an accurate watch on Batman, following all his moves and by the looks of it, has a powerful and large military force under his wing. You as the gamer will don the cape and cowl or take on the apocalypse as the Dark Knight himself. But Arkham Knight isn’t your only threat. Other enemies that you are lined to fight off includes Firefly, Scarecrow, The Riddler among others. On the other hand, Joker’s death has been traumatic for Batman and has taken a considerable toll on his mental health.

Darksiders III will have the gamer in the shoes of a Horseman of the Apocalypse, a ferocious warrior by the name Fury. Her objectives in the game are straightforward as she aims to find and kill the Seven Deadly Sins. In terms of an emotional strategized gameplay or combat lining, Darksiders III will present a whole different approach in comparison to that of the other two games in the franchise or like that in Dark Souls-lite or God of War. The gameplay in this particular one will follow traditional hack-and-slash combat technique, a definite happy news for gamers who are fans of the original gameplay style.

These two new games are going to be significant additions in the collective line-up of PlayStation Plus, each offering over dozens of hours of gameplay time. The release date for Darksiders III is clashing with that of the Darksiders Genesis, thus making a thematic connection between the two. In case you have missed the third entrant in the series, this is the perfect time and setting to catch up before you see the union of all four horsemen coming together for another triumphant surprise later this year.

Batman: Arkham Knight and Darksiders III will be available for adding to and downloading on your game library this Tuesday, 3rd September. If you are looking for a diversion with some of the other good games that are currently trending this month, WipEout Omega Collection and Sniper Elite 4 are still available for another week.