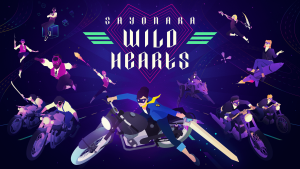 Sayonara Wild Hearts is the product of Simogo games trying to come up with something more thrilling and depth. It’s a launch title for the game subscription service called Apple Arcade Games.

Sayonara Wild Hearts is speeding for its way into the gaming world and is a soup made of pop-culture which can be enjoyed I several platforms.

Not all music games drag you to the dance floor but Sayonara has beautifully creative pop music set up combining dance fighting, pop music and high-speed chase on motorcycles and deer that fascinates the player. The game is payable on mobile and doesn’t lose its charm for a moment.

Sayonara Wild Hearts is a dreamy arcade game about riding motorcycles, skateboarding, and dance battling, shooting lasers, wielding swords, and breaking hearts at 200mph which makes it a hypnotic experience.

The pop album video game can be experienced both on mobile and PS4. It’s a high adrenaline game which is swiftly making its place in the hearts of the fans.

As the heart of a young woman breaks, the balance of the universe gets disturbed. A diamond butterfly shows up in her dreams and leads her through a highway in the sky where she finally comes face to face with her other self, who is a masked biker called The Fool.

It’s a journey through a custom-written pop soundtrack, chase scores and is set out to find the harmony of the universe which is hidden away in the hearts of Little Death and her star-crossed allies: Dancing Devils, Howling Moons, Stereo Lovers, and Hermit 64.

The game succeeds to put the player in a good mood and the game designers have put in a lot of attention to the music. The background is also beautifully crafted and feels like it is synced with the music and the game play.

Fans are already excited about the VR ports of the gaming experience. As a whole, the game is imaginative, creative, fun, and hopeful.

Sayonara Wild Hearts will be available on several platforms like Play Station 4, Nintendo Switch, and Apple Arcade from September 19 and is sure to hook the gamer with its surprising new ideas.