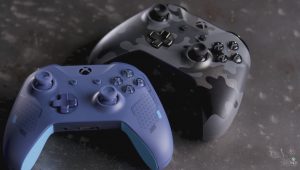 Equip yourself for a battle with the launch of the special Midnight Forces II Edition by Microsoft which is surely going to elevate the gaming standard.

The first edition of the wireless controller was released back in 2014 which was based on a military theme and was of navy blue color. Fans loved the army pattern because of its unique design.

Microsoft revealed its new Xbox wireless controller and the new edition is inspired by one of the most popular designs from the fan favorite military theme Forces series and the updated gaming device features a blue camouflage pattern and textured grip for enhanced comfort. The Thumbsticks and D-Pad of the controller age designed to be quick and sharp.

The Xbox Wireless Controller Midnight Forces II also has a 3.5mm stereo head set jack to plug in for a fully immersive gaming experience. It also comes with Bluetooth technology for gaming on Windows 10 devices or Samsung Gear VR. The wireless devices also allow customizing the buttons such that the controller fit the gamer’s preferences freely. The mapping of the buttons can be done through the Xbox Accessories apps.

A stand out feature of the new controller is the Impulsive Triggers that gives a precise, sensitive, and subtle feel to the payers while they are playing.

Compete your gaming set by buying Midnight Forces II special Edition Xbox Pro charging stand which is built with the same high quality as Xbox Wireless Controllers so that it’s an exact match and the NFC magnetic contact system ensures a perfect fit and secures the charge.