A New Issue found in Boeing 787 Dreamliners by the U.S. Federal Aviation Administration 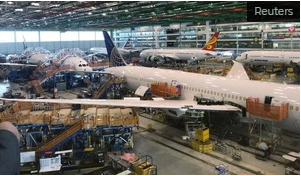 American aircraft maker Boeing Co has announced on Tuesday that they have decided to slow the production rate of their 787 Dreamliners. The decision came after a structural fault related to production in their twin-aisle airliner program was found.

The company believes that they will be able to deliver less than half of the ordered 787s, which is something like 100 that is in its account this year. Though they were expecting to produce a large number of aircraft, they will not be able to do so. They are now focussing on a thorough inspection and numerous repairs to resolve the defects in the particular aircraft.

Boeing had not commented on the new production rate of their 787 aircraft. What they have disclosed is that right now they have decided to produce lesser than their current production rate, which is five jets every month.

The shares of Boeing have declined 3.2% in the early trading.

The aircraft-maker giant has been able to produce and deliver 156 jets of different types in the current year so far. They had delivered 157 jets in the year 2020.

As per the reports of the U.S. Federal Aviation Administration, in the new issue faced by the company, there are some gaps in the parts where the components are joined together in a forward pressure bulkhead.

The FAA reported on Monday that Boeing has found the problem and they are doing their best to resolve the issue before they make their delivery of the planes.

The company has been struggling with different electrical flaws and different other problems with their 787 Dreamliners and 737 MAX since last year. After resuming production for five months, they have once again restarted the delivery of 787 when the new issue hit.

Boeing has explained that they will be taking all the time that is needed to make sure the airplanes meet all the safety and quality measures before they finally deliver the planes.

The FAA has said that it will be reviewing the data to decide if the 787s that are already in use in the commercial service, need the same kind of modifications.

In June this year, 146 orders for jets were booked by the company. A lot of the buyers have switched their orders to some other model or canceled the order completely. The number of the canceled 737 MAX jets revealed by the company in 71.

In June Boeing was able to deliver more than 45 planes to the customers. The number is the highest monthly delivery since March of 2019. At that time the second 737 MAX crashed causing many people to die.

Boeing reported that the company delivered 10 widebody aircraft in June. And one of them was a 787-9 for Turkish Airlines. They delivered 2 P-8 maritime patrol aircraft and 33 737 MAX to the US Navy as well.